Robot is a machine that looks like a human being and performs various complex acts (such as walking or talking) of a human being; a similar but fictional machine whose lack of capacity for human emotions is often emphasized. – An efficient insensitive person who functions automatically (from merriam webster). 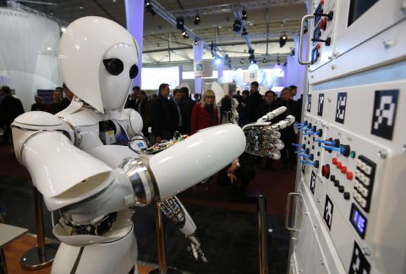 Robotics – the branch of technology that deals with the design, construction, operation, and application of robots. 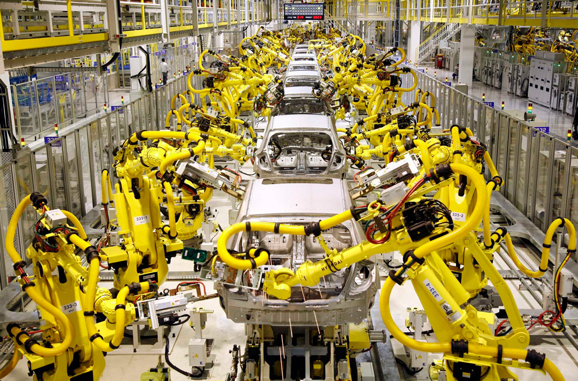 Types Of Robots by Application

Since the advent of robots, work has been shared between man and machine. But, as robots become more technologically advanced and autonomous, they learn how to do jobs faster and better than humans. Their precision, intelligence and endless energy levels make them the perfect employees for a wide variety of jobs that humans just can’t afford to do.

Basic Parts of an Industrial Robot 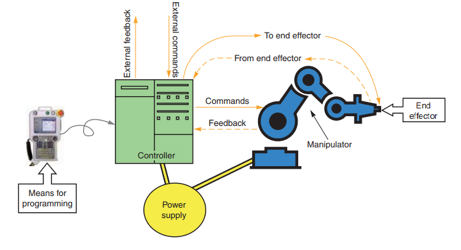 Articulated/Jointed arm – This robot design features rotary joints and can range from simple two joint structures to 10 or more joints. The arm is connected to the base with a twisting joint. The links in the arm are connected by rotary joints. Each joint is called an axis and provides an additional degree of freedom, or range of motion. Industrial robots commonly have four or six axes.

Cartesian/Rectilinear/Gantry – Cartesian robots have three linear joints that use the Cartesian coordinate system (X, Y, and Z). They also may have an attached wrist to allow for rotational movement. The three prismatic joints deliver a linear motion along the axis.

Application: Palletising, Grinding process, assembly, handling machine
Tools. This type is one of the rarely used now a days because most of
Its function, movement is now part of the SCARA robot, this type was
Heavily used during the 80’s.

Polar/Spherical – in this configuration the arm is connected to the base with a twisting joint and a combination of two rotary joints and one linear joint. The axes form a polar coordinate system and create a spherical-shaped work envelope.

Delta – These spider-like robots are built from jointed parallelograms connected to a common base. The parallelograms move a single EOAT (End Of Arm Tooling) in a dome-shaped work area. Heavily used in the food, pharmaceutical, and electronic industries, this robot configuration is capable of delicate, precise movement.

Fanuc robots are used in aerospace, automotive, consumer goods and many other industries. Over 250,000 Fanuc robots have been installed worldwide, according to the company website. 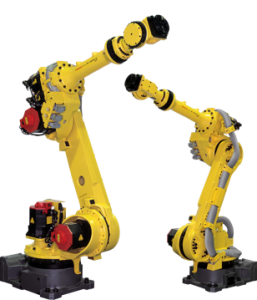 R1000/R2000
The R1000/R2000 series of robots are extremely flexible, high speed robots in the medium payload class. Motion Controls Robotics most popular robot series is consistent with the “Most Successful Robot in the World” according to FANUC, the R2000. While these robots were originally designed for applications in the automotive industry, their versatility makes them relevant in many applications. Here at MCRI we select this robot for general material handling and palletizing. 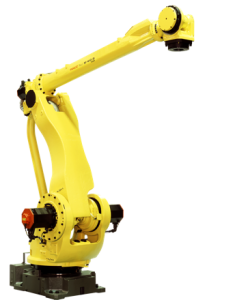 M410 Series
The M410 series is purpose-designed and built for palletizing. There are a variety of models in this series allowing for payloads up to 700kg. Our two best sellers in this series are the M-410iB/140H and the M-410iC/185. 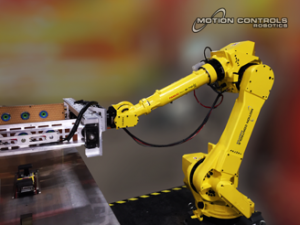 M710 Series
The M710 series is great for modular, compact applications such as case packing and palletizing cells, part pick and place, bin picking, furnace loading/unloading, and other press tending applications. This industrial robots standard model has a high ingress protection (IP) rating, so it is often selected for dirty work. 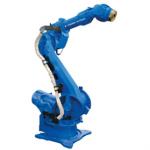 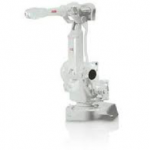 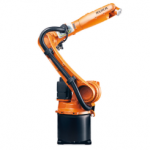